Please feel free to download them for free!
Posted by Unknown at 1:15 PM No comments:

Self-injury in Australia; some facts and figures

If you want the background epidemiological research study on sef-injury completed with over 12,000 Australians, you can download it here

Click on ANESSI A national study
Posted by Unknown at 12:19 PM No comments:

Self-injury. A story on ABC 730 report

This was a program which aired on 26th July 2012 on Australian Broadcasting Company's 7.30 Report. Self-injury is a difficult issue, and something hidden and not well known in the public arena. Our research studies suggest that 8% of the Australian population have deliberately self-injuured at some stage in their lives, and that 1% self-injuured in the 1 month prior to survey (about 200,000 people.
There is a consensus that self-injurers may be treated quite badly within public institutions, and that to re-traumatise someone who is already traumatised, makes things worse rather than better. We need public debate on self-injury
http://www.abc.net.au/7.30/content/2012/s3554593.htm

Intriguing differences in Firearm Crime between US States

I have been looking at the Guardian report on Firearm Crime <http://www.guardian.co.uk/news/datablog/2011/jan/10/gun-crime-us-state>. As an old solution focussed family therapist, I note there is an intriguing difference between the various US states.
Looking at the extremes we can group into 2:

The difference between Group 1 and Group 2 does not appear to be geographic in origin. Is it perhaps poitical or socio-economic? What are the group 1 states doing well to enable them to keep their rates of gun related deaths low?

The Guardian does not report suicides by firearm. Can anyone match the states comparing gun-related murder rates with gun-related suicide rates per 100,000?
Posted by Unknown at 4:06 PM No comments:

Gun Crime Statistics in the US by state

How high is gun crime across the US - and which states have the worst figures? This is the latest data from the Guardian Newspaper in the UK.

And this is only murders occurring with guns. Given a suicide rate over 30,000 per annum, and a percentage of gun suicides over 50%, you can begin to get a true sense of the impact of firearms in the US.

I am beginning to feel I do not want to visit the USA any more...
Posted by Unknown at 1:05 PM No comments:

Violent Death in the USA

So, OK, I want to understand this.
According to a Guardian UK report
As in many western countries, the suicide rate is higher than the homicide rate. The latest data available from the Centers for Disease Control and Prevention and reported by The American Foundation for Suicide Prevention < http://www.afsp.org/index.cfm?page_id=04ea1254-bd31-1fa3-c549d77e6ca6aa37 > indicates that 36,909 suicide deaths were reported in the U.S. in 2009, an increase of 2.4 percent over the previous year. Suicide rates in the US have been increasing since 2000. Fifty-two percent of suicides are with a firearm, accounting for about 19,000 deaths.
So, there are somewhere in the region of 27,775 deaths per annum from Firearms. That seems like a lot of death. I guess it means there will be an impact on somewhere in the region of 277,750 grieving family and friends (at a conservative estimate). And being traumatic, the grief will go on for a number of years, and maybe down generations. And, of course, repeated next year and the year after...
So why does the USA continue to have laws which allow the purchase of firearms, especially semi-automatics which seem to have been involved in the latest shooting in Aurora, Colorado. Of course the National Rifleman's Association and Lobby go on claiming that "guns don't kill people, people kill people'. But at least in suicide prevention, we know that 'reducing access to means' - that is getting rid of access to guns - has a profound and long-lasting impact on rates of suicide. In Australia, after the Port Arthur Massacre in 1996, the Howard government attempted to rid the country of guns - especially semi-automatics. We in Australia have not had a massacre since. Suicide rates demonstrate that guns (while still available in gun clubs and rural areas) as a cause of suicide has been markedly reduced.
When will the US ever learn?
Posted by Unknown at 4:42 PM No comments:

Two Kookaburras - not sure we are friends

And then there were two - sitting on the swinging hammock. There was some conversation, but ultimately they agreed to disagree and one flew away. Anyone know whether both of them are males? 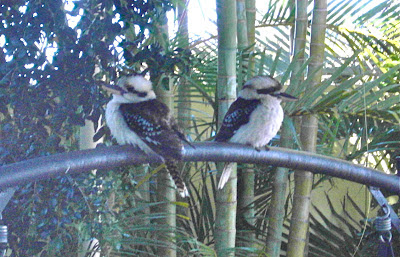 Posted by Unknown at 7:33 PM No comments:

Its a Solar world

OK. We finally succumbed to the idea that going solar might be a part of our contribution to the world. It has, so far, been remarkably easy. You contact someone and sit down to discuss. You decide. You pay a deposit, and several weeks later someone arrives with ladders and 16 solar panels. Four hours later its all done. You pay the rest of the money, taking into account the rebate from the Australian government. Some weeks later, Energex may come and hook us up to the grid - if we are lucky.
So what could be simpler? I did worry about the roof - we have had leaks in the past. I did worry about standards - but was reassured. I still have a niggling feeling something could go wrong - but that is just me... 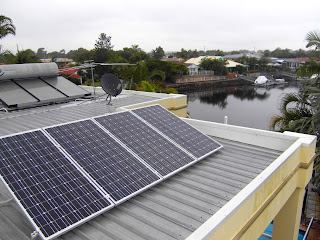 Posted by Unknown at 2:32 PM No comments:


We had the privilege to go to the Judith Durham concert at the Brisbane Convention and Exhibition Centre last night - "Colours of my Life' - a  retrospective which included memories and songs from her childhood in Tasmania, the four years of her time with The Seekers, and then songs drawn from the sadnesses of some of her life. That was just the first half of a two hour show. The voice is still rich although there was the odd quaver in the very early vibratos. But then she is just a bit older than I am, and I cannot say I have much voice left at all. She is fragile and slightly stiff onstage, but then again 50 years in show business must have taken its toll as would have watching her husband die from Motor Neurone Disease (MND).
The second half was exquisite. Drawn from her career as a solo singer and performer there was the new 'Brisbane' from the Cities Suite, her own version of 'Advance Australia Fair' (which just happens to be 300% more meaningful and appropriate to modern Australian society than the original)! And then there was 'Georgie Girl' which gained a standing ovation.
Somewhere in there were songs recorded at Abbey Road, an early Elton John for which she was the first female singer, some Scott Joplin ('Alexander's Ragtime Band') played superbly on the piano (Durham was originally classically trained on piano), and several songs which included the Sousaphone - now when did you last see one of those.
This was a night to be remembered and treasured. Judith Durham is a real lady, a national icon, a treasure. And the voice is superb, just as I remembered it back in the 70s.
She plays her last gig at the Sydney Opera House next week. Don't miss it.
Posted by Unknown at 1:14 PM No comments:

Just a few weeks later, and our friend is much more mature. He sat on a fence just resting from the rain, and taking in the scenery. I quietly took some scraps out to the decking. He eyed my from about 10 feet, but seemed to think I was not much to worry about. Having gone back indoors, we watched until he decided somewhat languidly to investigate. After a bit, he jumped back onto the fence and watched with apparent disdain while four young crows finished the scraps.
Just love the blue flash. 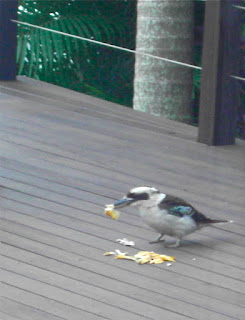 Spent the last 2 days at the Salvation Army Hope, Meaning and Direction Bereaved Through Suicide conference in Sydney at Leighton Hall, Uni NSW in Kensington. Excellently attended, a large number of eminent speakers including one from Ireland (Barry McGale) and four from the United States (Madelyn Gould, Michelle Linn-Gust, Jack Jordan and Jerry Reed).
I was highly honoured by Alan Staines' invitation to chair all the keynote sessions, so I had a fantastic opportunity to meet, greet and host.
Each of the keynote sessions were opened by a bereaved through suicide person (in US terms, a 'survivor'). Heart and gut wrenching, but grounding. In addition, so many of the professionals there had also lost loved ones, so the general atmosphere was collaborative and caring. My hope is that those who found themselves emotional at any time were able to get sufficient support on the day.
The final panel session sadly did not include Madelyn (who had to return to the US), but to the names above we added Judith Murray, Barbara Hocking, Barbara Wingard, Tom Brideson and Diana Sands - a regular 'brains trust'. We only had an hour and a half, but I hope all of them felt they got a fair go to make some points about the future actions necessary in this field of endeavour.
We had questions from the floor, with Dave picked up Michelle's comments about the need to work better with media, by asking about the restricted media representation of suicide (2200 pa) compared to car accidents (1200 pa) and murders (800 pa). This provoked a vibrant discussion. Kate added to this with the complexity getting media exposure regarding The Gap in Sydney. Tony raised the issue of lack of openness in investigations of suicides occurring in mental health services. Raylee commented on the contribution of some courageous bereaved who had acknowledged suicide in public death notices. Vern raised the issue of how to get helpful information about relevant services easily and quickly after a suicide in the family, and Louise commented on possibilities for online management of an active database. Jill raised new services which were trying to provide services, but this led to debate on the range of services and problems with duplication, and the fact we forget about active services over 10 years or so and then 'recreate the wheel'. Several speakers (Jack, Jerry, Barbara, Tom) acknowledged the power of the group of bereaved people getting together to make change, and and Barry opened up the new thinking about Social Media and the opportunities for access to information at the local level. Alan Staines suggested the need for a national body to bring together all the activities in support of bereaved through suicide in Australia, and this was met with general acclaim.
I reminded people in closing that "When all is said and done, there is a lot more said than done", and what we need is action.
Postvention IS Prevention.